Blowfish Advanced offers several interesting security and encryption related features that I have not seen before in a program of its kind.

It integrates itself seamlessly into the Windows Explorer context menu offering fast access to encryption and decryption operations.

Just select a file, right-click it, and select to decrypt or encrypt it from the context menu that opens up.

One interesting feature is to divide the password to decrypt files. It is for instance possible to save 50% of the password on a keydisk and 50% as a password that you have to remember. A file could only be decrypted if the keydisks is loaded and if the correct password is entered as well.

Another application would be to share the password between users which would mean that all users had to enter their part of the password to decrypt the file or folder that had been encrypted before. 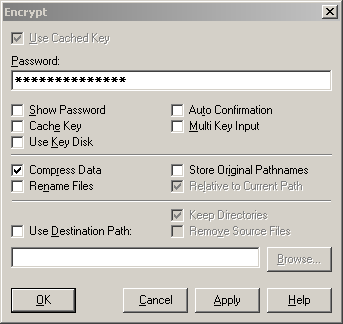 Another interesting feature is the ability to wipe files and free disk space. If you want to make sure that "normal" users can't recover files that you deleted you should use this option. Recovery tools like Recuva will not be able to recover files that have been wiped using this methods.

A pretty unique feature is the ability to change the algorithm that has been used to encrypt the files and folders. This could be useful if someone would have detected a method to defeat an algorithm to ensure the safety of the files.

Update: The developer homepage is no longer available. We have uploaded the latest version of the application to our own server. To download it, click on the following link: bfacs257inst.zip

Please note that the program may not work in newer versions of Windows. In addition, Virustotal reported that seven engines detected potentially unwanted software in the installation file, like some form of third-party offer that is included in the program.

Martin Brinkmann is a journalist from Germany who founded Ghacks Technology News Back in 2005. He is passionate about all things tech and knows the Internet and computers like the back of his hand. You can follow Martin on Facebook or Twitter
View all posts by Martin Brinkmann →
Previous Post: « Speed Up Windows Vista Reinstallation
Next Post: 3D Screensaver with your pictures »