Infected or Not: Is your PC Infected ? - gHacks Tech News
ghacks.net

Infected or Not: Is your PC Infected ?

I'm not that fond of online virus scanners because they always need special file access privileges and scan your files which can be a privacy issue as well. Infected or Not from Panda Antivirus however caught my attention by providing interesting statistics about infected computer systems on a worldwide and countrywide scale.

According to statistics posted on the site, which are updated when scanning computers by the way, 10.90% of all PCs scanned were infected. PCs with Antivirus installed had a infection rate of 8.62% while PCs without Antivirus were infected 14.56% of the times. 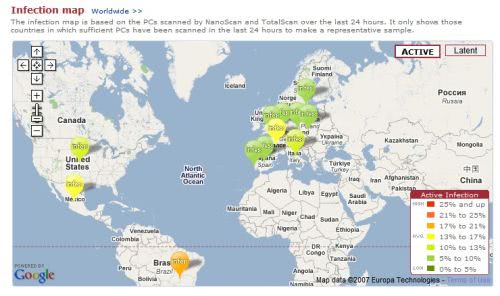 The scan works with Firefox after installing an add-on which can only be uninstalled from the default installation location which is at C:\Program Files\Panda Security\NanoScan. Execute the file nanounst.exe to uninstall it again.

Antivir reported a trojan during installation and execution which can be considered a false positive. In case you are wondering why I have Antivir installed, I did not test the service from my main computer.

Update: The web page does not display the Google Maps mashup anymore that was showing infection rates on the map. What you get now is an online antivirus scan that you can run right from the page if you are running a compatible web browser. If you do not, you are asked to download the free Panda Cloud Antivirus instead to your PC to use it instead to scan the computer.

If you are interested in some new data, check out the following websites: