Not every game runs perfectly fine with the default settings. Some drop in performance more than others when you are increasing quality settings such as Anti-Aliasing and Anisotropic-Filtering while others show no gain in visible quality when you are tweaking certain graphics settings.

Nhancer is a software for Nvidia graphics cards which offers way more settings than the Nvidia control panel. It provides a global setting which applies to every application that does not have it's own profile and profiles for individual games and applications. 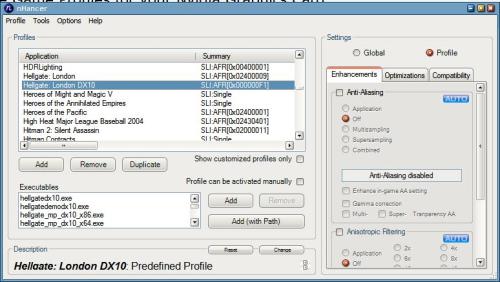 The main use of nHancer is the ease of use when changing settings, especially those 3D-related settings of your Nvidia graphics adapter. Gamers who like maximum performance or maximum quality and tweak those settings for individual applications will love nHancer.

All Nvidia graphics cards are supported by nHancer as well as all Forceware 60+ releases, the official Nvidia drivers. Windows Vista is supported as well as DirectX 10.

The last release of the application dates back to 2010, and while that does not mean that it is of no use anymore today, you will definitely notice that the application is quite old. If you look at the included game listing for instance you will notice that it does not games that have been released after that period in time.

You can still use the program to create application or game specific profiles that you want to run and as far as I can tell, everything should still work just fine even with newer Nvidia drivers and graphic cards.

Note that the application requires the Microsoft .NET Framework 3.5 to run.

Previous Post: « Lower the noise of your hard drives with SilentDrive
Next Post: « Permanently Assign Drive Letters to USB Devices