Blank out part of the screen

It is sometimes important to concentrate on a task at hand and blend out everything else that is not related to it. This could be the case when you are reading an interesting article, editing a Microsoft Word document, watching a video, programming or playing a flash game. Everything around the needed area can be a distraction and getting rid of that distraction may help you concentrate.

Zorro is a great software that runs on all Microsoft Windows operating systems starting from Windows 95. With Zorro, users can blend out parts of the screen that are not relevant to their current task. I can think of several applications other than the ones already mentioned where this may be useful.

Note: Before you activate the application's functionality, make sure you enable a hotkey to switch it off again. If you don't, you may end up with an unusable system as you may not be able to kill the Zorro process depending on the area of the screen that is still visible.

It is possible to increase or decrease the default size of the window by simply dragging it into the correct position, to select a defined size between 160x120 to 856x480 or make it fit a window. The cursor and the taskbar can be hidden if that is needed as well, or remain on the screen if that is preferred instead. 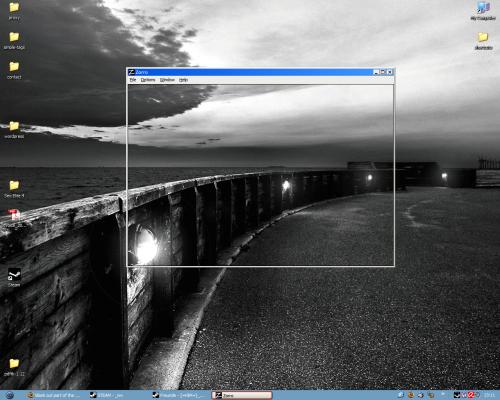 Once you have activated Zorro the rest of the screen will turn black - or to another color that you can select in the program settings. Zorro is a useful program for Windows that is provided as a 32-bit and 64-bit portable version and setup version. You can use it to blend out part of the screen that you don't need to avoid distractions which works similar to "turn off the light" extensions for web browsers but with the difference that it is not limited to the browser window.

Update: Zorro has not been updated since 2008, which indicates that the project has been put on ice, or even completely abandoned by its developer. Downloads are still working though, and the latest version available on the developer site is also compatible with the Windows 7 operating system. The developer provides both portable versions and installers for 32-bit and 64-bit editions of Windows.