The ultimate way to tag and rename mp3s

I'm one of those guys who likes to have a neatly categorized mp3 collection with a distinct folder structure ( band name / album ) and properly named and tagged songs. I absolutely hate it if songs are not properly named or are missing tags because it messes up the structure on my iPod and many other mp3 players as well.

I tried a lot of mp3 taggers in the past and was never 100% convinced to continue using them. Some would rename songs without asking, some were not able to import tags which meant that I had to manually edit all tags by hand - do that for thousands of songs - while others were just so complicated that it took simply too long to use them.

I almost gave up but then I found a sweet little software called Tag Scanner. I hear you guys mumbling already that you surely would have heard about Tag Scanner if it was that great. I do understand your doubts but they are not justified this time. The author is from Russia and decided to create no English version of his website.

This in turn makes it impossible that search engines index the site properly and all those freeware hunters will fail to notice it - well, most of them that is, hehe. 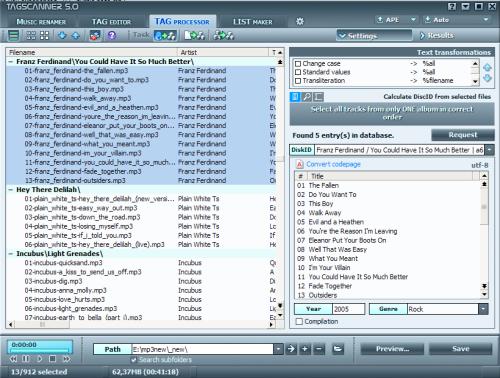 The Tag Scanner interface looks fantastic and a little bit confusing at the same time. The most important parts are the four tabs at the top of the screen which are: Music Renamer, Tag Editor, Tag Processor and List Maker.

Rename files with ease using placeholders and tag information. The default format is artist - title which can be easily changed to artist / album / artist - title for instance. Gives you a lot of options, absolutely brilliant.

This is the manual Tag Editor which is not needed most of the time because of the Tag Processor which does it automatically. In case it does not you can use the Tag Editor to edit the tags by hand.

Looks up songs in an online database (you can select a default one in the options), preview the tag output and save it. Change the tags of an album with only three clicks. Offers manual searches if the automatic one did not come up with results.

Export song lists as html, csv or excel tables. You can also save and import playlists in here.

Tag Scanner is one of the most sophisticated tagging programs out there. It supports everything you could possible want and more, and is easy to use so that you won't run into any issues when you are using it for the first time.