Readyboost is a new disk caching technique in Windows Vista which uses flash memory from flash devices to boost system performance. Caching system resources for small, random I/Os in flash ram is faster than caching them on one of your hard drives which speeds up certain disk reads by the factor 8-10.

It is pretty easy to enable Readyboost in Vista. Plug in your usb stick or flash device and wait for the autostart menu. Select Speed up my System using Windows Readyboost from the menu.

Windows Vista will perform some tests and display information if the device is not compatible with Readyboost. After that is done Readyboost is activated and Windows Vista uses the additional free space to speed up some disk reads. 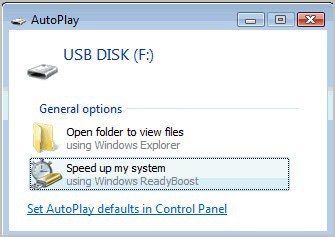 This is a great way to improve performance without adding new ram to the system. It is definitely not the best way to improve the performance of Vista but a good method to achieve better results fast. If you have the choice to buy more ram do that, if you can't do that use the flash device instead.

Tom Archer from Microsoft answers some of the most common questions about Readyboost in a blog post.

Update: Please note that Readyboost is also an integral part of Microsoft's current operating system Windows 7, and that the next version of Windows, usually referred to as Windows 8, will also support Readyboost. Options have remained the same so far, although it is a bit early to tell if they remain the same in retail versions of Windows 8.

Microsoft has improved the storage options of Readyboost under Windows 7. It is now possible to use up to eight devices for up to a maximum of 256 Gigabytes of additional memory, with each device providing up to 32 Gigabyte per storage device.