How to Repair the Vista Bootloader - gHacks Tech News
ghacks.net

How to Repair the Vista Bootloader

I encountered a problem after I installed Windows Vista and Ubuntu Linux next to my Windows XP operating system on the same PC. Ubuntu and XP were loading fine but Vista was showing an error that it could not load a file which made me think that the bootloader was trying to access Vista on the wrong partition. Vista unfortunately has a new location where the boot information are stored, it is called BCD Store.

I first tried editing the boot.ini but did not find an entry for Vista in there. After searching the Internet for about half an hour I discovered many forum entries where other users described the issue that I faced, and finally a link to a program called Windows Vista Boot Pro, a freeware which displays the boot information in Windows XP, and the option to edit the entries.

The first tab of  Vista Boot Pro displays the boot information that are stored in BCD Store. My previous assumption proved correct because there was no drive assigned to my Vista operating system which was strange. I switched to the Manage Os Entries and created a new entry for Vista with the correct drive letter. I also deleted the old non-working one.

After that I rebooted the machine and was able to load Vista without problems. I hope that everyone who encounters Vista boot problems will find this tool as well. As Borat would put it: It is nice..

Update: Windows Vista Boot Pro is no longer available as a free application. Windows users looking for a free alternative can try Easy BCD, which is free for non-commercial use. The program offers a similar feature set. 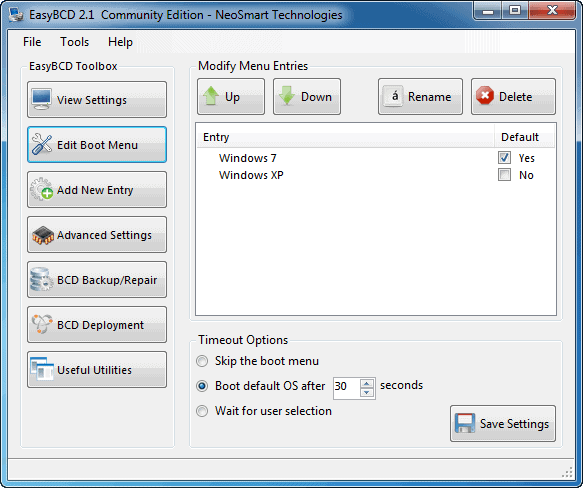 You can use the program to repair the Windows bootloader, or modify it so that it is pointing to operating system installations that it did not pick up automatically.

Easy BCD, as the name implies, is really easy to use. Just open the Edit Boot Menu tab on the left sidebar, and you should see all installed operating systems in a list. Here you can modify the menu order and select a default system.  You may also edit existing entries here, or add new entries to the boot manager of the system.