Ghacks got slashdotted yesterday and I had to enable caching to make the site run fast as usual. I'm sorry if you experienced troubles connecting to my website, those should be solved by now.

When I was installing Windows XP on my new computer that had only SATA drives I had to use a floppy disk to load the SATA drivers because Windows did not have them onboard at that time.

I had to buy a floppy drive, floppy disks and create a bootdisk and load the drivers from that disk during setup.

You can use freeware programs to optimize the process. Most computer systems come without floppy drives these days, and while you may not need to load drivers manually anymore during Windows setup, there may be situations where this is still a requirement. 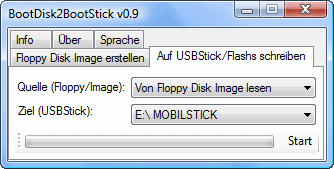 I'm now going to review two freeware programs that emulate floppy drives and let you copy and run the bootdisk from USB.

The first freeware is called Bootdisk to Bootstick, which lets you copy the contents of a floppy disk or virtual floppy image to an USB stick. The USB stick remains bootable just like the floppy disk is.

This is great if you do not have a floppy drive anymore but need to boot from floppy because your manufacturer is offering the tool / driver only as a bootable floppy disk. This is often the case for drivers for older PC hardware.

Update: The site is no longer available. We have uploaded the latest release (from 2011) to our own download server. Note that we have done so for archiving purposes only, and that we don't support the program in any form. You can download it with a click on the following link: Bootdisk to Bootstick

Martin Brinkmann is a journalist from Germany who founded Ghacks Technology News Back in 2005. He is passionate about all things tech and knows the Internet and computers like the back of his hand. You can follow Martin on Facebook or Twitter
View all posts by Martin Brinkmann →
Previous Post: « Copy text without formatting
Next Post: Download Random Images with SeqDownload »