Good news for users of the popular Bittorrent client uTorrent who did not like the decision to add in-content advertisement to the program. The initial plan of the company was to add the ads to a line at the top of the client just on top of the regular torrents there.

And while that is not off the table, the company today announced that it will make the feature optional. Advertisement will still show up in the client once you upgrade it to a version that includes the ad module, but users who do not like the ads can turn them off in the client. The reason for not going down the opt-in route for advertisements should be obvious: barely anyone would use the option.

User backlash after the announcement this Sunday was intense, and many mentioned that they would uninstall uTorrent to switch to a different Bittorrent client that would not force ads upon them. Making advertisements opt-out is a compromise between displaying ads to generate additional revenue from the client, and pleasing long-time users who dislike the addition of ads to the client, on top of bundling uTorrent installations and upgrades with adware and selling uTorrent Plus, a commercial version of the client with extra features. 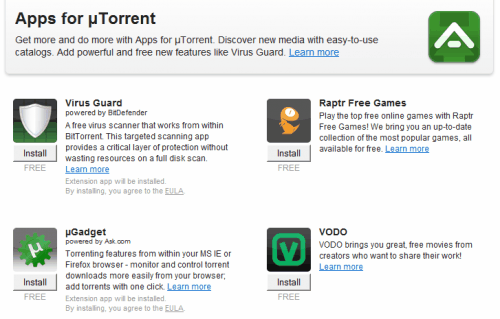 According to the announcement, the development and marketing team discussed whether an opt-out for the built-in advertisements should be added to the client. Initially an opt-out does not seem to have been favored by the decision makers, but after the community reaction, the team decided to implement the opt-out feature.

We hear all of your concerns and comments. And from the very first post, I said we would listen and adjust as needed.

Response: This being an experiment, weâ€™ve previously discussed whether or not to provide an offer opt-out. Given your feedback, weâ€™ve decided to go ahead with this in the upcoming version. Each of you will have the opportunity to see and experience offers for yourselves. If you donâ€™t like what you see, simply opt out entirely.

The same announcement is also addressing the "bloat" in recent versions of uTorrent. According to the announcement, the last six months have been about bringing improvements to the client, existing features and bug fixes, and not new features. For the near future, no new feature additions are planned. The developers in fact will remove the apps feature that has not been popular at all, and especially not with the veteran community.

Beyond this, we hear the calls among many of you for a Âµ that is smaller and meaner than the current Âµ. Something like 1.6, 2.0 or similar. Over the past year, weâ€™ve discussed various paths to getting there and are taking this request seriously.

Even better, the developers are looking at possible options to bring the client back to its former leaner and smaller self. While that is currently just a train of thought, it will be interesting to see how this will turn out.