A new version of the popular WordPress blogging platform has just been released. Webmaster running a WordPress blog should see update notifications right now on their sites in the admin dashboard. Here it is then as usually possible to install the update right from within the admin dashboard, or update manually by downloading the new version from the official WordPress website to upload and install the upgrade manually.

According to the official announcement at the WordPress website, WordPress 3.4 features "significant improvements to theme customizations, custom headers, Twitter embeds and image captions".

The theme customizer is the biggest change in version 3.4 of WordPress, allowing admins to change various aspects and settings of a theme. This is done by displaying a live preview of the theme on the right, and the various customization options on the left. The type of options depend largely on the theme, with site title, tagline being always available, while coloring options only on themes supporting the new feature. The default WordPress themes for instance support these types of customizations. 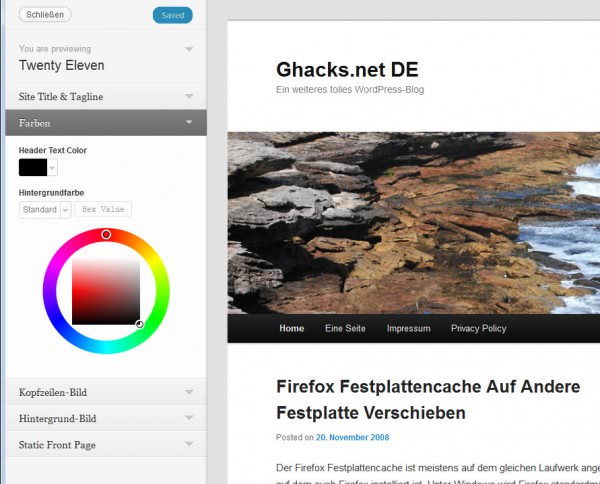 Colors, backgrounds and custom image headers can be changed for themes that support the feature. The developers plan to integrate additional customization options in future WordPress releases.

Other features worth mentioning in WordPress 3.4 are improvements made to the software's custom headers feature, support for HTML in image captions, WP_Query improvements, and a number of additional improvements like infinite scrolling when browsing installed themes in the admin dashboard and a variety improvements for WordPress developers.

Admins and developers can check out the WordPress Codex for a full overview of all the changes in the WordPress 3.4 release. It is as always recommended to backup the blog before upgrading to the new version, or to test the new installation on a test server before upgrading live sites to the new version. I personally had no issues on Ghacks and several other sites that I administrate, but that does not mean that other admins may not experience issues.