Social networking sites may use the contents that you post on their sites in a variety of ways. They may sell them to advertisers, use them to personalize advertising on their sites, may report them to local authorities or ban your account.

Encrypt Facebook is a new Google Chrome extension that offers an ingenious way out for users who want to communicate on Facebook privately. The idea is simple: All messages are posted in encrypted form on the site, and saved as thus in the Facebook database. Facebook cannot read the contents, and the same is true for third parties requesting access to the contents.

The setup process is divided into three steps:

The biggest hurdle to setting this up correctly is getting the security key to all participants. Only those with the correct key can read the encrypted data on Facebook, and can post protected contents on the site that are readable by others.

You need to click on the extension's icon in the address bar to set it up correctly. Here you are asked to enter the Facebook Group page url and the encryption key. 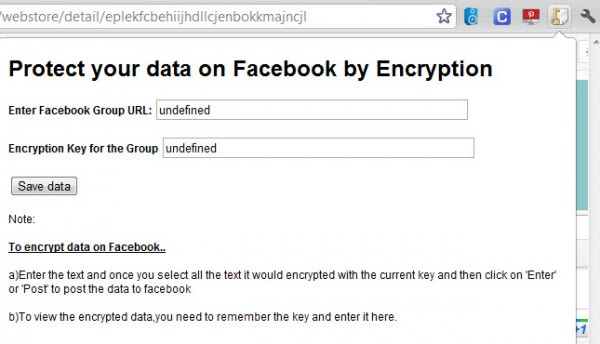 Once done, you can write posts or reply as usual on that group page. Your contents are automatically encrypted whenever you finish writing the message. A click on post adds the message to the site

Group users visiting the page with the extension and correct encryption key installed will see all messages in decrypted form. Everyone else with access sees only the encrypted messages.

The extension uses an AES 256 key to encrypt the messages. The key is stored locally.

The extension has primarily been created for users in oppressive or corrupt governments to allow citizens to communicate freely without fear of repercussion.

Two issues need to be mentioned. It first needs to be noted that the key is posted in plain text on the local system. Anyone with access will be able to access the group messages as well, provided that the group is known and accessible.

Facebook may also notice the garbled contents on their site and put an end to it when they discover it.

Chrome users can download the extension from the official Chrome Web Store.