Logged in YouTube users can vote for videos by clicking on the like or dislike buttons displayed underneath each video. The total number of likes and dislikes are then displayed on the video page.

YouTube is taking that concept a step further with YouTube Slam, a new feature where videos are battling it out against each other.

The idea is simple: Promote talented video makers on YouTube with the help of Slam. Three different games are currently offered, comedy, cute and bizarre slam.

Two videos are displayed on the same page to the user. YouTube users now watch both videos and vote for one that they like more. The video they like gets a vote which moves it up on the overall leaderboard. 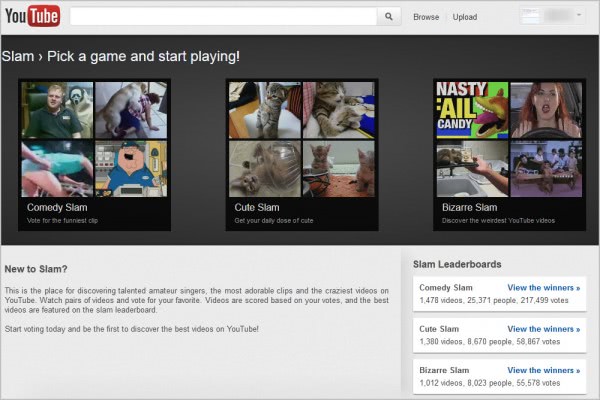 A question like "which one's funnier" is displayed on the battle page. Videos are not obviously played at the same time, even though that's possible by clicking play on both at the same time.

Users can also click on the skip button to skip the decision and load two new videos that they can watch and vote for.

Videos are exchanged on a weekly basis with about a thousand videos to watch in each category each week. That's 3000 videos per week and 12000 per month.

YouTube users who do not want to vote can visit the leaderboard pages right away to watch the top videos of the current week and past weeks. A play all button is available too.

YouTube Slam serves a number of purposes. It provides users with an never ending wave of upcoming videos to watch, and video makers with an opportunity to gain extra exposure if their videos are selected by YouTube to participate in a weekly battle.

The most popular category by far currently is Comedy Slam with about four times the number of total votes.

YouTube Slam could become highly popular with the "funny" or "cute" video crowd. What's your take on the new service?