One of the design elements that I did not like in the development builds of Firefox 4 until now was the add-ons manager. I have reviewed it in detail in the article How To Uninstall Add-ons In Firefox 4. Basically, what I did not like was that it looked kinda messy, hard to read and out of place.

The latest snapshot of Firefox 4 that was released today introduces a new and improved add-ons manager. Time to take another look at it to see what has changed. 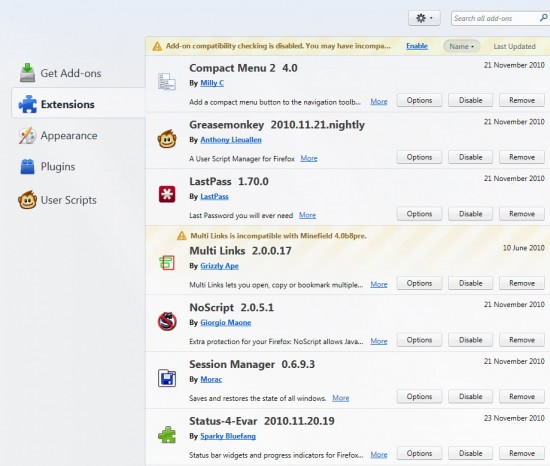 The first obvious change is the different color scheme of the add-ons manager. Incompatible add-ons are now displayed in a lighter color scheme instead of the irritating green color that was used before.

What's even more important is the addition of a removal button next to each add-on listing. Before that a tiny x was displayed at the end of each row, which was easy to overlook.

The only thing that remains is the tiny removal message that appears after clicking on the remove button in the add-ons manager.

The color scheme has been changed which makes it slightly easier to locate the Restart Now and Undo links. Still, it would be better if the developers would improve the layout further, maybe by moving the message to the very top of the add-ons manager, or to the sidebar where enough free space is available.

Users who click on the icon next to the search form can enable a new listing in the sidebar. A click on View Recent Updates enables the new entry in the sidebar. This new menu lists the most recent add-on updates, which can be very handy for troubleshooting browser issues.

What's your take on the new add-on manager's design? Let me know in the comments.

Firefox may soon paint all sites in dark or light mode, if you want

Previous Post: « How To Disable Dynamic Image Resizing In Firefox
Next Post: « Converter, On Demand Unit Conversions In Firefox