In the last year or so there's been an explosion in sites allowing you to use a third-party login to access their services.Â  Every major company except for Microsoft has so far jumped on the bandwagon but it appears we have an outright and runaway winner already.

Read Write Web is reportingÂ a study that shows Facebook is way ahead of the competition with almost half of all third-party logins.

The result leaves search giant Google languishing in second place and only just ahead of Twitter and Yahoo!.

Third-party logins have become a useful way for smaller websites and businesses to be able to manage site user logins without the headache (and developments costs) that go with such a feature.Â  It also helps users who know they can visit a whole host of different websites without needing to sign up with each and every one.Â  It's a win/win.

When it comes to commenting on news sites it's a slightly different story but let's not forget facebook is still the winner overall. 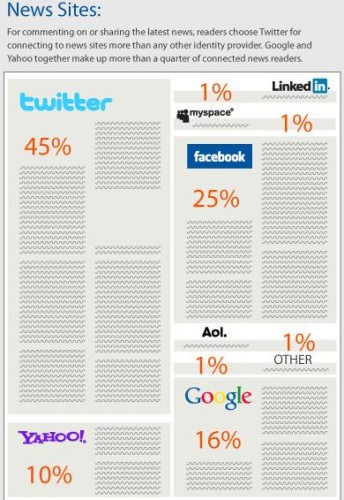 The numbers switch around when we start breaking them down into different categories. Facebook becomes even more dominant, increasing to 52% when we look at entertainment websites, with Twitter and Myspace jumping into second and third place. For B2B websites, the distribution is a bit more even overall, with Facebook taking 37% of the pie and Google, Yahoo and Twitter all coming in with around 18%.

It will be interesting to see how thisÂ trend developes over the next year and if Microsoft will ever throw their virtual hat into the ring.