Tracking a PC's or Laptop's power consumption can be helpful in several ways. It can for instance be used to analyse power usage to reduce the energy bill or find ways to increase a laptop's battery life by reducing the overall power usage.

Microsoft Joulemeter is an experimental program for Windows that can track the PC power consumption. It is compatible with desktop and mobile computers.

The application places an icon in the Windows system tray on startup. A click on that icon displays the main interface where the power consumption and statistics are displayed and constantly updated. 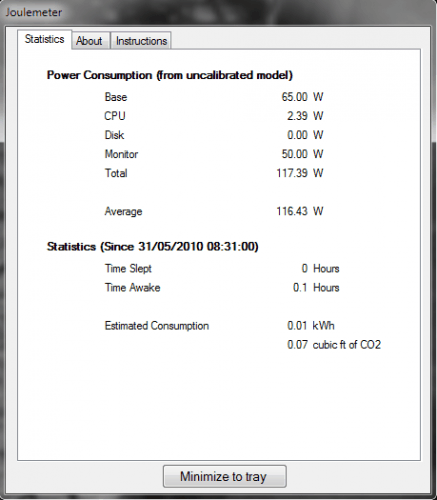 It also has to be noted that the values are estimations if the application is installed on a desktop computer. The connection of a WattsUp power meter and the calibration module of Joulmeter is said to return accurate statistics.

Laptop users do not need a WattsUp meter. They simply have to pull the plug if the laptop is at least 75% charged to get more accurate power date.

Microsoft Joulmeter is an interesting program for Windows that can track a computer's power consumption. The software can be downloaded from Microsoft Research.