If you purchase a Solid Stage Drive (SSD) of the current generation you usually have access to two features that reduce the wear leveling and write amplification of those drives. The first is called the TRIM feature which is currently only supported by Windows 7 and no other Windows operating system. Trim needs to be supported by the SSD as well which most Solid State Drives of this generation support either out of the box or after a firmware update. TRIM basically allows the operating system to send information about unused data blocks (for instance after deleting files) to the SSD controller which then has a record of blocks that are available for writing. This speeds up write processes of the SSD.

The second feature or process is usually referred to as Garbage Collection. This basically optimized the Solid State Drive again for write processes.

The Intel Solid State Drive Toolbox is a Windows software program that can be used to optimize and analyze Intel SSDs that are installed in the computer system. It supports running regular optimizations that make use of the above concepts to retain the drive's performance over time. It can furthermore be used to view drive information, check the Solid State Drive's SMART attributes and run a fast and full diagnostic scan on the selected drive. 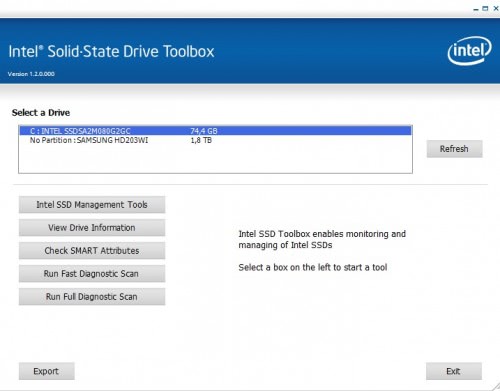 The drive information for instance display the drive's firmware version, model and serial number which can be used prior to upgrading the SSD's firmware if a newer version is available on the Intel website.

The most important feature is however the SSD optimizer which computer users need to run regularly (Intel recommends once a week) to retain the drive's performance. The weekly runs can be scheduled in the program which will later be added to the Windows Task Scheduler.

The Intel Solid State Drive Toolbox is a must have program for computer owners with an Intel SSD. It can be downloaded from the Intel website