Exclude Websites From Appearing In The Firefox Address Bar

The Firefox awesome bar, often also called location bar or address bar, tries to match letters entered by the Firefox user to bookmarks, tags and the Firefox web browsing history. Several settings can be changed so that the awesome bar will ignore some of the locations that it searches for matches.

Firefox does not offer options to exclude specific websites from the search in the awesome bar. Some users might want to have the functionality to hide websites from being displayed in the awesome bar either because of users sharing a Firefox profile on the same computer system, hiding some urls from prying eyes that might walk by or to exclude websites that should not be found that way. 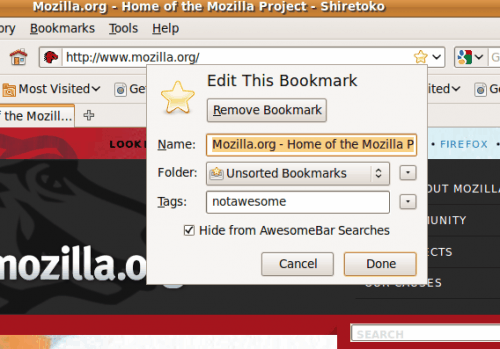 The Firefox add-on Not Awesome adds the option to exclude websites from the awesome bar's search. It does so by filtering out websites that have been bookmarked and tagged with notawesome. Every bookmark with that tag will not be included during searches in the Firefox awesome bar.

The easiest way to add these tags is to open the Firefox bookmarks and edit the websites in there. Another option becomes available when adding new bookmarks.

The add-on adds a checkbox to hide the bookmark from awesome bar searches in the add bookmarks dialog. Not Awesome is an experimental Firefox add-on that is available at the official Mozilla Firefox website.

Update: The Firefox add-on has been discontinued. There is no similar extension available for the browser. The only option would be to remove the site from the bookmarks to avoid that it is displayed in the address bar. It is alternatively possible to block all bookmarks from showing up in the awesome bar.