Testing Linux distributions could not be easier already. All it usually takes is to burn the image of the Linux distribution to CD and boot from the CD to experience that distribution. There is not a possibility to save configuration data usually but that is not the point of Live CDs which provide a testing environment without installation. They do serve other purposes as well, for instance booting into a secure environment on a computer.

An alternative to burning Live CDs would be MobaLiveCD which is an application for Windows operating systems that emulates the process using Qemu. This essentially means that Windows users can run Linux live CDs in Windows without having to burn them to CD first and boot the computer from the CD afterwards.

This means it offers a quick way of testing a Live CD without having to boot the computer. It actually takes only two clicks to start a Linux live CD in Windows with Moba Live CD. This obviously requires a Live CD in ISO format on the computer. A good repository for Linux Live CDs is the LiveCD List. 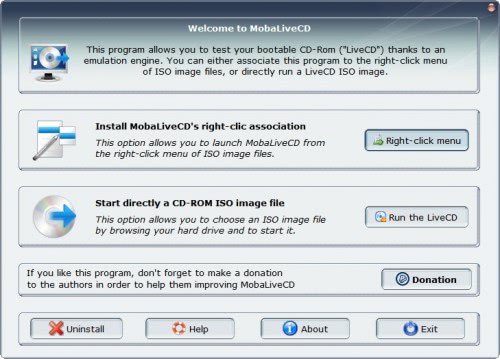 The live CD is loaded in a window and the user can interact with that Linux distribution normally.

Emulation has the downside that running the Linux live CD in Windows cannot be used to determine hardware compatibility. Another problem is that emulation is always slower than booting from the live CD directly. Speed is probably the main concern for most users especially for those with older hardware. If a user keeps those two aspects in mind he should be able to get the full experience from Moba Live CD.