Windows Explorer Replacement Explorer++ tries to become what Notepad++ already has become, a fast, efficient, feature rich alternative to Windows Explorer. The portable and lightweight software program introduces several new features and a new layout that make aims to improve the management of files and folders on the system. It's not a full blown Total Commander like suite though.

The first noticeable aspect about Explorer++ is that it is a fully portable application, it can be executed from anywhere. The memory footprint is acceptable with roughly 6 Megabytes of computer memory and 3 Megabytes of virtual memory.

Explorer++ supports tabbed browsing that uses the same shortcuts as those of the Firefox web browser. You can create a new tab with Ctlr-t and switch between tabs using the Ctrl-1 to Ctrl-9 shortcuts. Tabbed browsing improves the workflow significantly, as you can now manage multiple different locations, folders and files from within one window, which you can't do in Windows Explorer where you need to open multiple windows for the same effect.

Tabs can be bookmarked for future access which is another much needed feature for every Windows Explorer replacement. To bookmark a tab simply select Bookmarks > Bookmark this Tab or press Ctrl-D to do so. Bookmarks become available under the same menu afterwards from where they can be opened with a single click. It is alternatively possible to add bookmarks directly to the toolbar so that they are visible there directly. 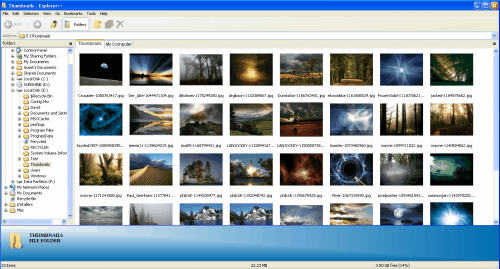 It supports filters and splitting and merging of files. As I said before it is no match for the heavy weight Total Commander like applications which support so many features that it is hard to keep an overview. Here is a short list of supported features:

It would have been nice if you could divide the main explorer window into two panes which would both show the contents of a folder or drive. That would make file operations much easier in my opinion. One has to consider that Explorer++ was released as alpha and that the software developer will surely add functionality to his software program, we just have to wait a bit longer.