The Registry cleanup tool quickly scans the Windows Registry to find gaps, fragments and wasted space and displays a quick report after the Registry scan that outlines the gain from defragmenting the Registry.

A smaller Registry has several advantages including a faster system start and an overall increase in system performance. It is necessary to close all open software programs before starting the Registry scan. 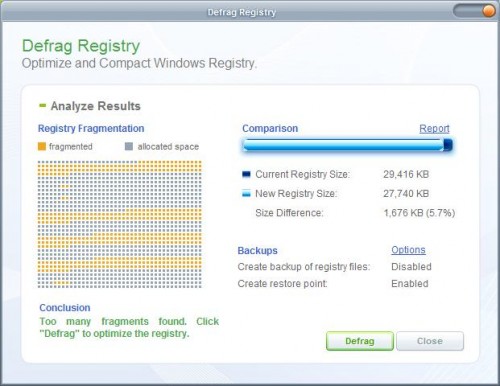 RegDefrag provides access to automatic System Restore Point creation and Registry backups before starting the defragmentation. Both can be configured in the program's options.

A html report can be created in the end which provides an in depths summary of the Registry cleanup process. The computer system has to be restarted before the changes take effect.

Update: The official program and developer website is no longer available. It returns a not found error when you try to open it. We have removed the link therefor from the article, and suggest that you use an alternative instead as you may run into compatibility issues eventually due to lack of updates.

A free alternative is WinASO RegDefrag. It optimizes the Registry in three steps. It scans the Registry in the beginning, displays the result of the analysis in the second step, and leaves it up to you to go ahead with the defragmentation.

The application displays the size reduction in the report. If it is in the Megabyte range, you may want to go ahead with the defragmentation to speed up the start of the system.