The Orca Browser is based on the Firefox 3 core but adds lots of unique features and options to it that Firefox does not support.

The first thing that you notice after installation is the speed of the browser. It's obviously a subjective feeling but it seems a lot faster than Firefox 3 or Opera 9.5 for that matter.

It already has several features built-in to the browser that Firefox 3 users can only gain by adding add-ons to their browser.

Talk about ad blockers, mouse gestures and auto-filling forms among other things. The layout looks cleaner and is slimmer than that of Firefox 3, even if you have installed the Tiny Menu add-on in Firefox.

This is mainly achieved by combining the header (that displays only the page title and the buttons to close, maximize and minimize the window in Firefox) with the Menu getting effectively rid of one toolbar at the top. 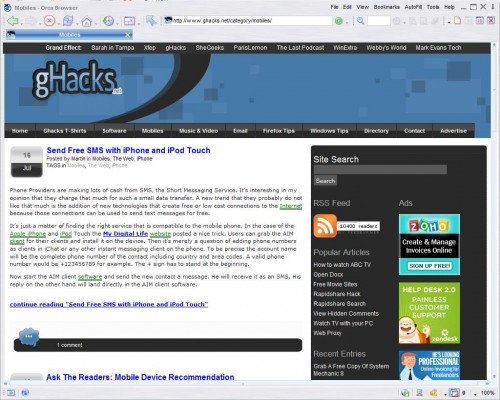 In addition to that, the current version of Orca comes with roughly 15 skins and language support for about 20 languages.

The options look kinda confusing at first glance because Orca provides access to several functions that are only available in the about:config dialog In Firefox. 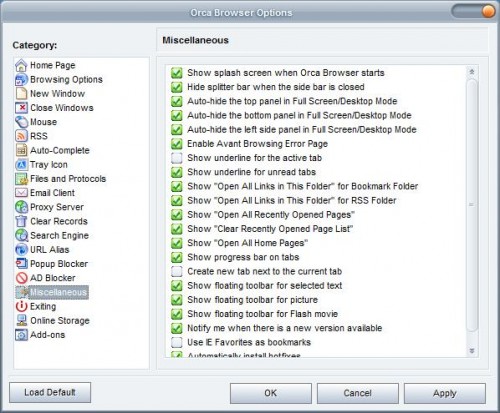 Lots of options as you can see. It does support keywords (url aliases), different search engines and many more features known from Firefox.

The one thing that is missing currently is in my opinion add-on support for Firefox 3 add-ons. If they could deliver that as well I would immediately change to Orca. Since I'm not using add-ons heavily it might even be time to change directly.

I just want to test the browser for a few days to see how it compares when used on a daily basis to see if it is stable enough and how good the ad blocker really is.

Update: Orca Browser has been renamed to Avant browser. It is offering access to three rendering engines now including the Firefox Gecko engine but also Internet Explorer's Trident engine and Webkit that is used by Apple Safari.