Windows Live Photo Gallery made a big leap forward with the release of the newest beta version 2.2. The greatest enhancement over previous Live Photo Gallery versions is the ability to publish pictures directly on Flickr with a stamp of approval from Flickr. Another aspect will please many users. Before this beta users had to install Windows Desktop Search to work with it which is no longer needed for Windows XP users.

So, if you are running XP you can uninstall Windows Desktop Search and continue using Windows Live Photo Gallery afterwards. The developers do not get into much detail but they claim that they fixed tons of bugs. The newest version can not be downloaded right now which means that everyone has to fire up Windows Update if they have Automatic Updates disabled after downloading the version available.

Tagging and Captions are actually supported and will be transferred to Flickr as well. It also feels a little bit slow compared to other image viewers but since this is a beta there is surely room for improvement. On the other hand, it is a Microsoft product.. 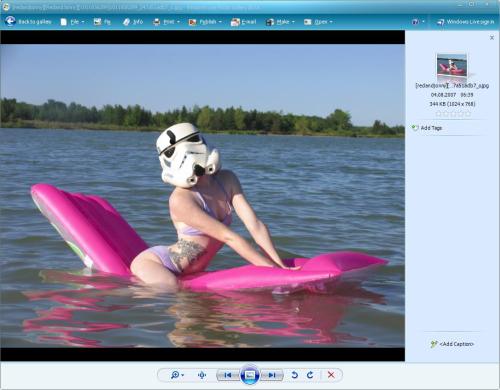 I also discovered more than 400 pictures in my profile folder which I was not aware of at all including the picture of this young woman wearing a Star Wars stormtrooper helmet. I have no clue, honestly.

Update: Please note that Windows Live Photo Gallery is now part of Windows Essentials, a collection of programs for Windows 7 or newer versions of Windows only. This means that you can't download and use the program anymore on older versions such as Windows Vista or XP.

The latest version of the program includes new features. You can now for instance create panoramas, import photos and videos or Photo Fuse, which lets you combine the best parts of multiple photos into one.